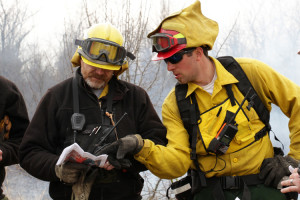 March 2015: Last week, highly-trained crews from the US Fish and Wildlife Service and US Forest Service conducted the second prescribed burn at Sycamore’s Columbia Mine Preserve, managed as part of the Patoka River National Wildlife Refuge. The burns are conducted on portions of the preserve on a rotating basis to maintain diversity.

The prairie that covers much of Columbia Mine Preserve is dependent on fire to keep invasive plants from spreading and clear out overgrown grasses that can choke out the native wildflowers. Together, we’re managing the habitat for grassland birds, like the Henslow’s and grasshopper sparrows. After the previous burn, green growth was coming on strong just one week later. 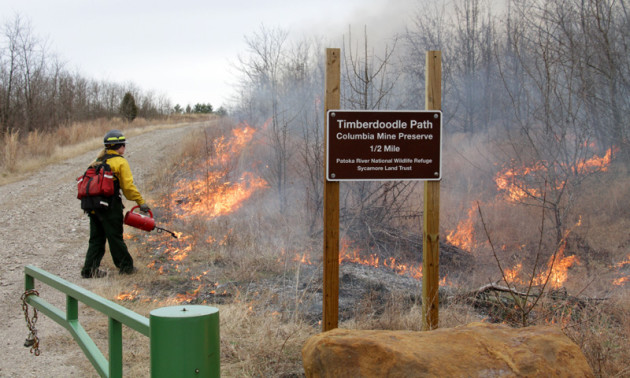 Controlled burns are conducted early in the year to profile reptiles and amphibians, which are less mobile than animals like deer and birds that simply move to a different portion of the preserve. Box turtles were still slumbering in their winter beds, for instance. When they awaken, they’ll find it much easier to spread out and establish new territories now that fire has taken care of the dense overgrown grass. 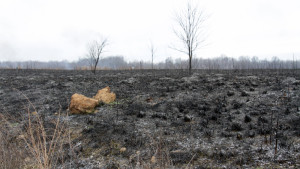 Bill McCoy, the manager of the refuge, writes, “About 7:30 p.m. after everyone left and Heath [Hamilton] and I were locking the gates, we stood there listening and watching woodcock spiral upward in their mating ritual and flutter back down to land in the cleared black ashes to ‘peent’ for their mates. Perhaps a good example of the Phoenix bird. The chorus frogs and spring peepers added a cheery air to the setting.”