Why is this red fox black? Fascinating sighting

A fox is a cunning critter. I have lived in rural Monroe County for three years and have lost chickens each spring to a fox. I have never seen the fox near the chicken coop. But I’m sure it is a fox. I’ve only seen it one time in the headlights of my car while returning home at night. Chickens have gone missing a few feet from our living room window at two in the afternoon while we were watching TV just on the other side of the windows. The number of chickens missing greatly outnumbers the fox sightings. The fox is cunning.

So imagine my neighbor and Sycamore member Pam Tyree’s thrill when a red fox trotted by within fifteen feet of her deck on the morning of June 12. Not a rusty-red red fox. A black red fox. While taking a picture with her phone and trying not to disturb the fox, she gently tapped on the window to get the attention of her husband, Tobin. The screen dampened the knock so Pam is our only witness. But she has a photo: 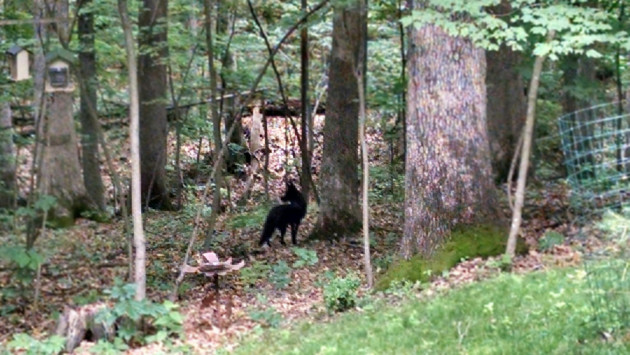 “Pam just saw this. Black fox?” A text message from my neighbor, Tobin Tyree, moments after his wife Pam saw the fox.

This fox wasn’t the first unexpectedly dark-colored canine in northeast Monroe County. Last fall, my son and I were driving home and spotted a black “dog.” We’d recently had two stray black dogs near our house and I said, “Tanner, looks like those dogs are loose again.” But this was not one of the stray dogs. When I saw the large triangular ears and long, narrow muzzle, I knew this was a coyote with black fur. It was only fifty yards off the road, close enough for me to distinguish between the characteristics of a coyote and the domestic dogs.

So I contacted furbearer biologist Shawn Rossler at the Indiana Department of Natural Resources. He told me, “Melanistic [dark-colored] canines are rare, but we do get a handful of reports of both black-phase coyotes and red fox annually. The black-phase in canines occurs occasionally [due to genetic mutation]. Over the last several years, reports have come in from Monroe (not including these observations), Vigo, and Kosciusko counties.

Shawn continued, “Black morphs of red fox are more common than in coyotes. The three most common morphs of red fox are the red, silver, and cross. Red is the normal coloration. Silver morph is mostly black with silver intermixed along the back and sides. The cross morph is darker with a well-defined cross across the shoulders.”

I visited Pam and Tobin on their cabin deck when I got home from the Sycamore Land Trust office. With the woods shading out the hot sun, we began the process of making a positive identification. I had Pam look at gray fox, red fox, and coyotes all in different color phases. Comparing the pictures convinced her that it was indeed a red fox in a black morph. The patch of red fur on the hind quarters was very noticeable. The size was distinct. It was only fifteen feet away, after all.

On that day, I outsmarted the fox. I kept the chickens locked up. The fox made his rounds and will be back. The fox paid no mind to the quaint cabin in the woods or its inhabitants.

Was Pam lucky that day? No. It wasn’t luck. When you spend time outdoors, good things happen. Like watching a box turtle swim across a creek. Or having a grouse within ten feet of you in a downed treetop. Or having your four-year-old son bring you a ring-neck snake he found in a tree cavity. Or seeing a black-phase red fox. These occurrences are not common. But none of these were luck. Good things happen when you spend time in the outdoors.