Why are bats associated with Halloween? 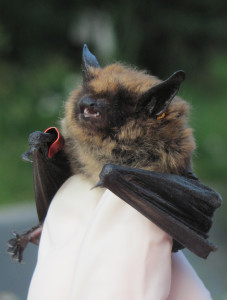 Bats have a rather fascinating appearance, like this Eastern Small-footed bat from Tara’s work in Tennessee.

Signs of the Season
By Tara Thomson

With the spookiest of all holidays right around the corner, have you ever wondered how certain animals became associated with Halloween? Why do kids not dress up as snails or slugs or other bugs? Why is it that bats are the creepy representatives of this holiday?

The connection between bats and Halloween may seem natural. Bats are generally nocturnal and they drink blood, right? Well, not exactly. There are three species that feed primarily on blood (the “vampire” bats) while the remaining 1,300 species feed on things like insects, rodents, and nectar. These vampire bats are where the group as a whole got their connection to Halloween.

When these bats were first observed lapping up the blood of cattle in Central and South America they were quickly given the label of “vampires.” This idea was made concrete when Bram Stoker’s Dracula (1897) depicted vampires shapeshifting into bats. Another unfortunate association bats have going for them is one with witches. It is believed that witches worshipped horned figures with wings—possibly bats? Furthermore, it is said that witches used bat blood in their “flying” concoctions. 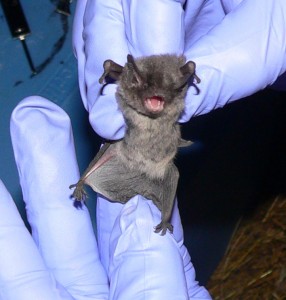 Bats have a creepy reputation, but they’re actually kind of cute! This endangered Indiana bat was captured and released during a survey at Beanblossom Bottoms Nature Preserve in 2012, which detected a maternity colony nearby.

With these scary associations to Halloween, it’s no wonder bats have had a bad rap! But there are quite a few myths regarding bats that may leave you thinking a little better of them.

Tara Thomson studied wildlife biology at the University of Georgia and has an MS in Biology from Indiana State University. She has worked on projects involving coyotes, northern bobwhite, ticks, and sage grouse. Most recently, she researched the roost ecology of the eastern small-footed bat in the southern Appalachian mountains. She is currently an admissions counselor at Indiana State University.