Just $6.71 for a lifetime love of nature and literature 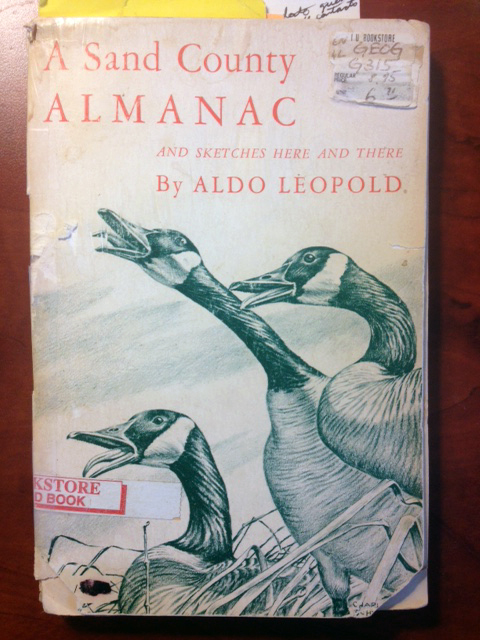 Shane’s original copy of “A Sand County Almanac,” purchased at the IU Memorial Union for $6.71, gave voice to his love of nature and literature.

Over twenty years later, I found the book that would meld my love of literature and nature. I happened upon A Sand County Almanac by Aldo Leopold while searching for my required texts at Indiana University’s Memorial Union. A Sand County Almanac was listed under the class Geology 315 at a discounted price of $6.71. I didn’t take geology that year but I bought the book.

Known as the father of conservation ethics, Leopold’s writings began to reinforce, shape, give perspective, and expound upon my beliefs in conservation. His literary skills influenced my writing. Never had I read prose that sounded so poetic. I have read the book many times, copied quotes into my writer’s notebook, and purchased used copies to give to others. I always wanted to use it as a read-a-loud or book club selection when I was teaching elementary school, and have encouraged my wife (who is an English teacher) to consider its value in a high school class. Leopold’s use of words is as beautiful as the pasque flower he mentions in the book’s forward.

Leopold set me on a path of using literature to make connections from the classroom to the outdoors, from parent to child, from peer to peer. The book is inspiring and has set the framework for whole areas of study (see the Leopold Education Project). As I raise two young boys and strive for us all to be closer to the land, I often hear these words, “There are two spiritual dangers in not owning a farm. One is the danger of supposing that breakfast comes from the grocery and that heat comes from the furnace.” This doesn’t make me think of simply breakfast and heat. It makes me think of myself as a consumer and the impact our lives have on the land. How can I be sure my children don’t fully succumb to these spiritual dangers? 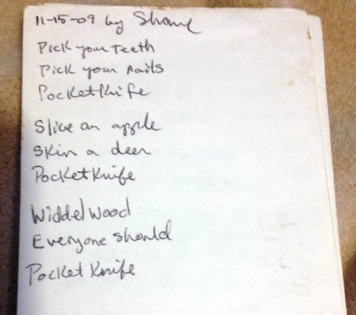 “Pocket Knife,” a poem Shane Gibson wrote on a 3×5 index card while sitting alone in the woods.

My love of nature and literature cross paths often now. In my dad’s last years of life, he stopped asking if I had “seen any deer?” during our outdoor experiences together and instead would ask “did you write any poetry today?” Indeed, I usually had done some form of writing while out in the field: making a list of birds, recording memories from days past, or writing a poem.

From my first memory of reading on my father’s lap to my current read-a-loud with my boys (Scat by Carl Hiaasen), literature and nature have had a significant influence in my life. I know Aldo Leopold and my father would approve this union of my two loves.

What shaped your relationship with nature? Are you familiar with Aldo Leopold, and if so, do you have a favorite quote of his?