John Gallman and Scott Russell Sanders are two of the most humble people you’ll ever meet. Scott and his wife Ruth honored John with a bench in his name at Beanblossom Bottoms Nature Preserve, and yet the first thing each of them wanted to share is that the other one deserves recognition! 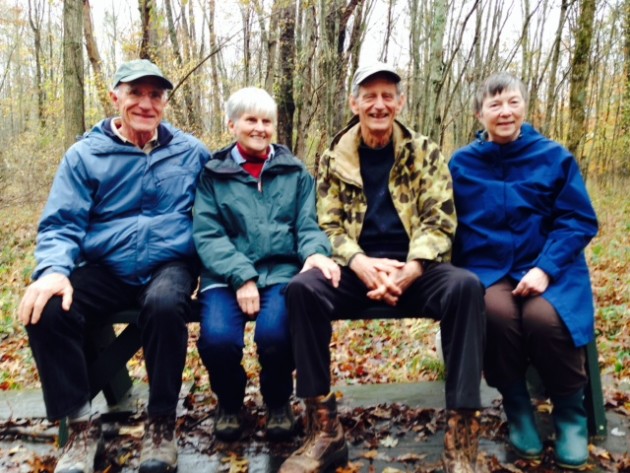 Scott Sanders, Beth and John Gallman, and Ruth Sanders take a seat in the woods on a new bench named in honor of John.

“I’m very honored by Scott, but he’s done more for the environment both locally and nationally than I ever could,” John said right off the bat.

Comparisons aside, John has had quite an impact on the environment. He served as the director of Indiana University Press, which is where he and Scott became friends in the early 1980s while working together to publish two of Scott’s books.

“I knew from early on that John loves the land,” Scott said. “As evidence of this love, he published books on birds, wildflowers, and gardening, and a major work called The Natural History of Indiana. These books invited readers to appreciate more deeply where we live.”

When John retired from IU Press in 2000, he put his love of land to work as Board President for Sycamore Land Trust. One of his first orders of business: “They’d been talking for years about putting a trail in at Beanblossom Bottoms, and I figured I’d try to get it done!” 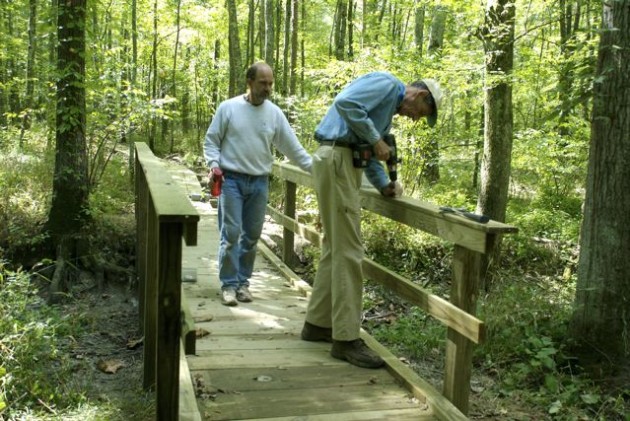 Building part of the boardwalk (John Gallman on right).

And so he did, with the help of many other volunteers and grants from organizations like The Laura Hare Charitable Trust and Duke Energy. If you have visited Beanblossom Bottoms, you know just how special the land is…and that you wouldn’t be able to see the eagle nest, the creek full of chirping frogs, or the alley of woodpeckers without the marvelous trail.

It took almost four years of hot, buggy work to complete the trail, but John and other volunteers persevered. “I’m motivated to do this because one of the biggest problems we face as a species is we’re cut off from nature. I think if it just changes a few people to be more in tune with the environment, it will have been a success,” John mused. 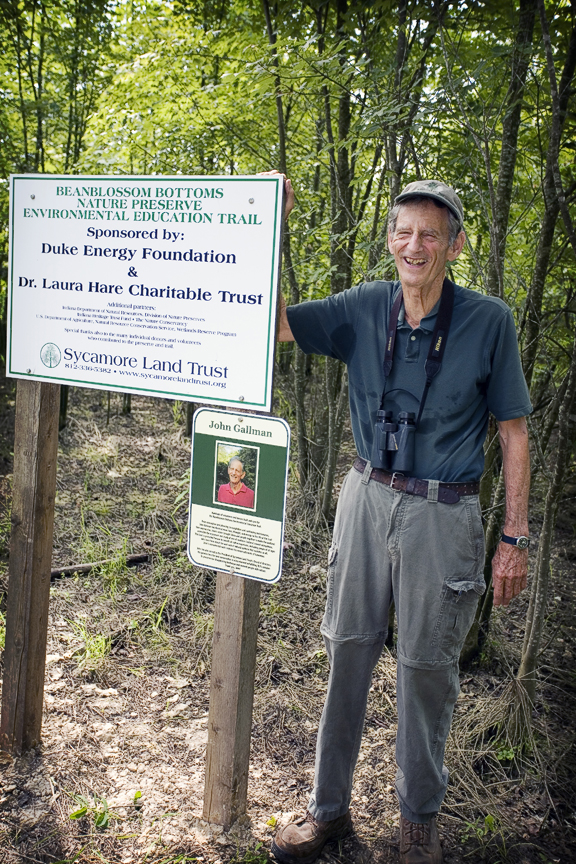 When Scott and Ruth learned they could name a bench in honor of someone, “Ruth and I immediately thought of John because of our friendship and his work as publisher as well as his contribution to Sycamore,” Scott said. “Sycamore is a model for other land trusts and John was president during a crucial transition.”

On a drizzly day in October, John and his wife Beth visited Beanblossom Bottoms with Scott, Ruth, and Sycamore staff to place the bench. The four friends were brimming with mutual appreciation and the pleasure of being outdoors.

John chose a quiet place for the bench and said, “I’m usually so busy when I’m there that I don’t even sit down. But in this secluded place, if you just sat for 15 minutes, the woods would enclose you and you’d get a chance to see nature that has forgotten your presence.”