— This article was originally printed in the Fall 2016 issue of our newsletter, The Twig. See a PDF of the complete newsletter. —

“Don’t go to Uncle Shane’s backyard! Bugs are back there!”

These were the words my brother used to keep his two young children in my front yard and in sight. It might have seemed harmless at the time. But the more I teach people of all ages in the outdoors, the more I see a fear of nature, negative attitudes that were likely formed at an early age. 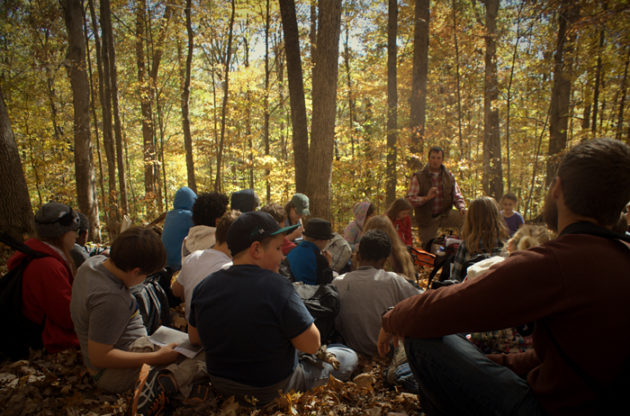 The first house that my wife and I owned was a small, 1965 ranch on a dead-end street. It had a half-acre wooded lot with many neighbors. Even so, here I first tapped maple trees and called in owls with my six-year-old niece. I experimented with my first prairie planting. My two-year-old son experienced the 2004 cicada hatch. My boys ate the raspberries that grew from a nook at the base of a large oak. Bumblebees sat atop coneflowers as our front door brushed against them each time our family went in and out. The boys weren’t scared. Nor should they have been. Nature was present in the heart of Indianapolis.

How my boys responded to nature at that early age was dependent on the experiences and opportunities we provided. Their attitudes would be shaped by the words and behaviors of my wife and me.

“Hey, let’s go to the backyard! There are bugs back there!”

I said this and offered many similar invitations countless times to my toddlers, at the same time that my brother’s words kept his kids on the driveway. This distinct difference will influence attitudes about being outdoors.

Recently, a second-grade student visited the Sycamore office. I had been working often with his class and we had just gone on a field trip. In class, I emphasized the identification of poison ivy and Virginia creeper. Shortly after he got out of the car, we started looking at plants growing nearby. His parents, still at the car, shouted, “Don’t touch anything. It could be poison ivy!” But this young fellow already knew what he could touch and what to avoid. Together we counted the five leaves of Virginia creeper. He’s had positive experiences in nature, and he’s learning how to be safe while having fun.

On another field trip to Beanblossom Bottoms Nature Preserve, our gorgeous wetland property in northern Monroe County, a camp counselor asked persistently if there were snakes. It was obvious that the counselor had a fear of snakes. As I gathered the dozen or so campers and adults, I tried to dispel any worries. “What is going to happen if a wild animal hears or feels this many
people coming?” “They’re going to run!” shouted some of the campers. “Why?” I asked, always trying to help my students think for themselves. “Because they think we’re predators,” was the answer.

The pep talk didn’t help. The adult counselor decided not to go on the hike and allowed a handful of young campers to opt out, too. That was the most disheartening part. I know some fears are hard to overcome, and the counselor was probably trying to do the kids a favor, but I see it differently.

Young and old benefit from positive experiences in nature. The ones who participated in the hike caught spiders, salamanders, dragonfly nymphs, a frog, and more. One girl said, as we walked on the boardwalk, “Nature is so beautiful.” I agreed, but I couldn’t shake the thought that some were being deprived of that beauty. Maybe the counselor did not have good experiences in nature as a child, but it’s never too late.

This reminded me of the saying we often quoted to campers and staff when I taught environmental education at Bradford Woods: “Attitudes are contagious; make yours worth catching!”