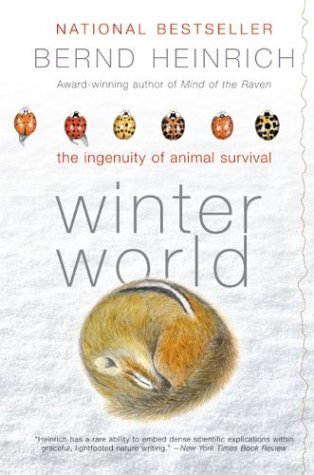 The Dead of Winter? Not in Winter World

I felt the ice under my skin and the grainy, coagulating mud in my nostrils as Bernd Heinrich describes how (air breathing) turtles live through winter in frozen ponds. Later, imagining my frozen caterpillar-self warming in March sunshine (yes, Heinrich is that good), I rejoiced at seeing my body start to squirm again:

“I wanted to put my woolly bear caterpillars to a test, and when I found two of them just out of hibernation… I put them… into a film vial and to -14 ° C in the freezer… Two hours later they were indeed quick-frozen into blocks of ice… I could tap the table with them. When thawed out an hour later, they were alive and well!”

In third grade I learned that it is possible to fall in love with a book, but not until reading Winter World did I realize a book could make me — almost — like wasps. Heinrich is a biology professor who writes like a journalism professor. His seemingly obsessive curiosity takes him, literally, into beaver dams, bear caves, and active hornet nests, and he reports back with elegant descriptions, articulate phrasing, and often dismaying imagery.

Winter World is every iota about survival, specifically us animals making it through the years’ cold, dry, wet, food-deprived, dark, predator-laden months. I began to wonder about all the things I am not seeing. Heinrich reminds us that creatures flourish beneath tree bark, in hidden nests constructed of moose hairs and grouse feathers, and inside goldenrod stems.

A scientist, he counts, measures, and tears things apart. He stuffs seeds into the cheeks of a roadkill chipmunk to determine its food-storing capacity; he dissects dead honeybee rectums to see if part of the reason they leave their cozy hives in midwinter is because they have to go to the bathroom. He answers hundreds of questions I’ve had since I was that third grader; he leaves me wanting to ask him thousands more.

The book’s tone flips back and forth between styles: Latin-name spewing, serious researcher and romantic poet. Just when I couldn’t process any more temperature-analysis data, the next page read like Thoreau enjoying a weeny roast.

“When I’m in the warmth of my cabin and hear gusts of wind outside that moan through the woods and shake the cabin on wintry nights, I will continue to marvel at and wonder how the little featherpufffs are faring. They defy the odds and the laws of physics, and prove that the fabulous is possible.”

Winter World examines our challenging situation of staying alive and (often) well in the part of the year when resources and comfort are particularly scarce. Heinrich is a scientist, nature writer, and poet, and thinks like an economist.