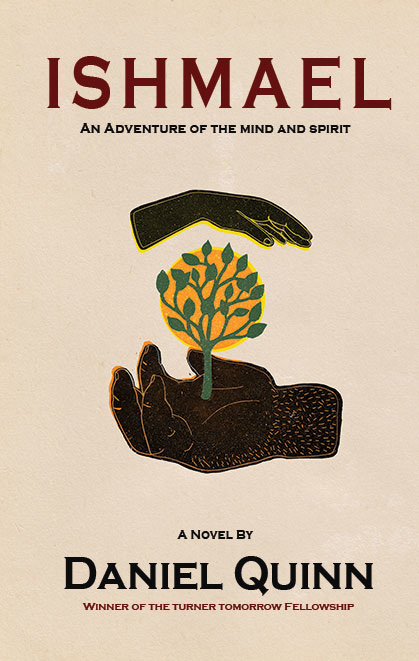 Sycamore Book Club Reads Ishmael: An Adventure of the Mind and Spirit

A Doomsayer in Ape’s Clothing

Hey, I thought a novel was supposed to comprise character development, description, and plot. Ishmael: An Adventure of the Mind and Spirit, by Daniel Quinn, discusses two characters, about whom we learn little, and tells no story, because it’s an essay in (filmy) disguise. But Quinn probably wisely predicted that most people wouldn’t finish a 266-page essay on man’s ruining the earth, mainly by destroying its biodiversity.

The main, and title, character, Ishmael, is a knowledgeable, negative gorilla who dominates the book as he educates his student, a young man aching to save the world (sound familiar, 20-somethings?). Ishmael uses the Socratic method to pull answers from his eager student. At times I remembered past therapy sessions. So many repeated questions.

Quinn masquerades as the gorilla masquerading as Socrates. And through his myriad questions I got his pessimistic point. Humans take too much. I kinda knew that already and have heard it many times (being not 20-something anymore). He divides humans into Leavers (inhabitants of underdeveloped regions, who still largely hunt and gather) and Takers, the rest of us, who rape the earth by degrading it with our agricultural tools, pesticides, fertilizers, and over-planting. We see a raccoon, and instead of wanting to kill (or, better? — ignore or re-locate) it, we summon the Pest-Away truck and pay to exterminate every raccoon, and who knows what else, in the neighborhood. Ishmael teaches that we’ve been fond of killing those who get in our way ever since Cain zonked Abel — according to the Bible, earth’s first murder.

Halfway through Ishmael, I said, “Nothing is happening in this book. Where’s the action?” Ishmael sits in his “office” and lecture-asks till the book’s end. I finished it. Sighed relief.

Maybe the direction Quinn says we’re taking is just part of earth’s story: Homo sapiens came, with big brains, remarkable egos, and unslakable thirst for more stuff. This one little old species ended up axing the earth’s biodiversity and in the end, the whole world — and of course Homo sapiens itself.

I realized something HAD happened in the book. I was — and am —thinking about conservation, wastefulness, and change more than I ever have. Ishmael hadn’t offered me a solution, and I had resented that. But, it had. Quinn urges every earth-advocate to simply tell Ishmael’s story to a few others. Maybe they will tell an additional few. Maybe we will stop producing food we don’t eat (some estimates are that 40 percent of the food produced in the U.S. goes unconsumed). Maybe some of us will stop trying to kill everything we find inconvenient or scary or ugly. Maybe some of us will start to burn up fewer nonrenewable resources. Maybe we will stop believing that Homo sapiens is the be-all and end-all, that the earth was made for man to “conquer.”