A Lifetime of Conservation

This article originally appeared in the summer 2017 issue of The Twig, our 24-page member newsletter. To read more from this issue, click here. To become a member and receive The Twig in the mail, donate online.

One of the joys of working at Sycamore is getting to know the inspiring people who are involved with the organization. Lee Sterrenburg is just such a person – an exceptional birder and environmentalist who helped create the Goose Pond Fish & Wildlife Area, and received the Sagamore of the Wabash Award (Indiana’s highest State honor) for his conservation work; an educator who brought together English and science in his career as a professor at IU; and a long-time member and volunteer who has made Sycamore a beneficiary of his estate plan. 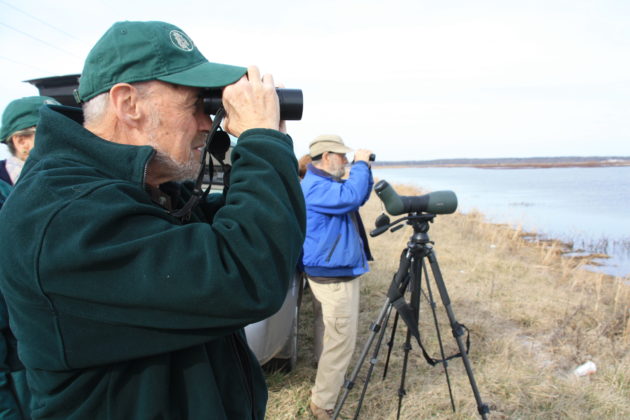 Lee’s love for birds, being in nature, and reading about biologists and explorers started as a boy in San Diego. He spent time at the San Diego Zoo and San Diego Natural History Museum, and joined the Audubon Society and participated in bird counts. He also visited relatives in Wisconsin who had land in an area known for birding, hunting, and fishing, and were influenced by Aldo Leopold’s conservation work.

“My favorite bird book as a child was Ralph Hoffman’s Birds of the Pacific States, illustrated by Major Allen Brooks,” he explained to me. “Originally published in 1927, this book might be called a kind of institution too. Hoffman’s writing featured the observer actively operating and walking out in the landscape. Allen Brooks’ watercolor illustrations portrayed birds in the landscape with romantic pale pink or salmon-colored skies casting light tinges on the mountain escarpments or wide-open western spaces. Hoffman’s informed observations of behavior and Brooks’ line drawings of birds in action brought art and science together for me.”

Lee came to IU during the early 1970s to teach English and Victorian Studies. In the 1980s he participated in a multidisciplinary faculty seminar on “Charles Darwin in Context.” The late Dan Willard was also a faculty member in the seminar. “I read a lot of Charles Darwin’s works, and also writings of Alexander von Humboldt in translation, and the 19th-century geologist Charles Lyell. This led me to teaching graduate seminars on Darwin in context and also co-teaching a combined English and School of Environmental Affairs graduate and undergraduate course with Dan Willard. Our team taught a course focused heavily on wetlands and rivers.” (Dan was later a founding member of Sycamore Land Trust).

In the year 2000 and after, Lee became very involved with a group of people working with the Indiana Department of Natural Resources to find a way to purchase more than 8,000 acres of farmland to create a wildlife habitat in Greene County. Within five years, the land was purchased with the help of many organizations, including Sycamore Land Trust, and the Goose Pond Fish and Wildlife Area was established. It is one of the most successful wetland and grassland habitat restoration projects in the U.S., famous for its whooping cranes, snow geese, and other wildlife.

Lee continues to be a very active bird monitoring volunteer at Goose Pond FWA. Sycamore’s recent purchase of a keystone property to add to Goose Pond FWA has been especially meaningful for Lee.

“I like assisting to bring together people of different political and organizational affiliations to accomplish shared goals of conservation.”

What has been your experience with Sycamore?

“I had been birding for a number of years at Patoka River National Wildlife Refuge. I strongly supported Sycamore’s successful purchase of the Columbia Mine Preserve as a part of a Refuge that U.S. Fish and Wildlife Service would manage, as the open landscapes attract many bird species in large numbers – making it a boon for birds and birders.”

“Sycamore has an overall grasp of the complicated conservation process, including preliminary assessment and evaluation, funding, the legal and sales and contractual complications, sale or donation, site improvement, and often opening the land to public access. In my experience, Sycamore has been very creative and persistent and skilled at cutting through the red tape and jurisdictional hurdles that regularly snarl up government and DNR attempts at land purchases. Sycamore can also on occasion quickly come up with the necessary purchase price for a key property. The State usually cannot do that, and State purchases sometimes fail. Getting the whole thing done might be a fitting rubric for Sycamore.”

Why is it important to you to support Sycamore in your estate plans?

“Doing estate planning tends to focus the mind on what’s important. What do I want to leave behind, and to whom, and why? Sycamore Land Trust exhibits values and attributes that I share or appreciate. In my experience, Sycamore has been visionary, pragmatic, responsible, and trustworthy about land conservation. Sycamore handles the intricacies of financing, legalities, easements, and partnerships. One can see the finite results by visiting their preserves. The Sycamore vision of the future includes not just acquiring land but also ongoing stewardship and education about the value of the land. I want to be part of that.”