Singing Off the Grid

An Interview with Malcolm Dalglish

This article originally appeared in the summer 2017 issue of The Twig, our 24-page member newsletter. To read more from this issue, click here. To become a member and receive The Twig in the mail, donate online.

I’ve been a musician and choral singer since I was five years old. I was trained classically, and performed a lot of religious music for audiences who sat still and listened politely.

Over the years, I would run into pieces that felt different, but I didn’t know why. I finally put it all together when I moved to Bloomington in 2009 and discovered Malcolm Dalglish, a local composer with international renown. I realized that all these songs I loved were written by the same quirky person. 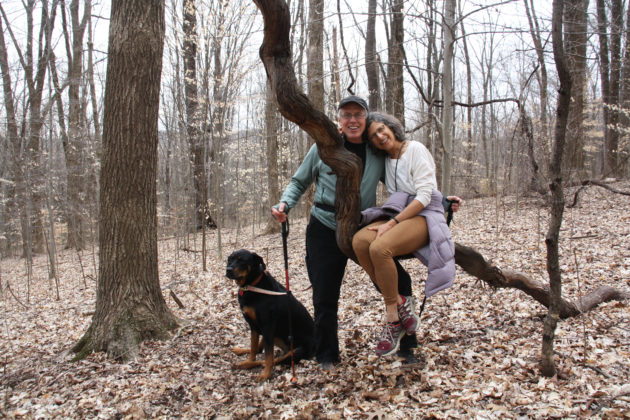 In a word, Malcolm’s music is grounded. The lyrics and the very notes themselves are in touch with nature, but they’re also rooted in the spirit of musicians who came before him.

“I like to compose songs in the style of a people rather than a person,” he explains. Many composers aim to be like the greats – Beethoven, Mozart, Bach – while Malcolm seeks influence from different cultures and traditions. He also stresses that the music must reflect and enhance the meaning of the text, rather than obscure it.

Unlike much of the artistic music of previous centuries, which is very religious, Malcolm seeks a sound that reflects the spirituality of his childhood, playing in the woods and drawing the details of nature in his sketchbooks. As he explains it: “Our family was raised in that religion of being out in the woods on Sundays.”

His song “Great Trees,” which is one of my absolute favorites, was written on a chilly winter’s night when the power went out and he sat near the fireplace. To me, the piece sounds folky, almost like a hymn, and it’s a true joy to sing. You can hear a recording of Voces Novae, the Bloomington chamber choir that I sing with, performing “Great Trees” at sycamorelandtrust.org/twig.

That song is a part of a larger work called Hymnody of Earth, which features Malcolm’s original compositions (and some reworked folk songs) set with text by beloved poet Wendell Berry. The poems, like The Peace of Wild Things, To the Holy Spirit, and Over the River, reflect Berry’s deep appreciation for nature. The Peace of Wild Things is a particular favorite among Sycamore staff, as you can see why:

When despair for the world grows in me
and I wake in the night at the least sound
in fear of what my life and my children’s lives may be,
I go and lie down where the wood drake
rests in his beauty on the water, and the great heron feeds.
I come into the peace of wild things
who do not tax their lives with forethought
of grief. I come into the presence of still water.
And I feel above me the day-blind stars
waiting with their light. For a time
I rest in the grace of the world, and am free.

© Wendell Berry. This poem is excerpted from “The Selected Poems of Wendell Berry” and is reprinted with permission of the author and Counterpoint Press.

Malcolm’s music runs the gamut from a capella choral pieces to funny folk songs with dance movements and mouth music. You might hear his self-built hammer dulcimer, various percussion instruments, and improvisations. All this comes to play in his off-the-grid Ooolation Singing camp on the doorstep of Yosemite and in performances at National Parks and concert halls around the world.

Southern Indiana is lucky to have a musician like Malcolm in our midst, but he feels equally fortunate to live here. He describes the beauty of our natural world, like Sycamore’s Amy Weingartner Branigin Peninsula Preserve.

“To be able to walk along a ridgetop that has sky above you and sky beneath reflected off a lake – it’s visually stunning,” he says of the trail, which he visits with his wife Judy Klein and their dog Lola. “There’s shale walls and limestone outcroppings, beaches with geodes, bird migration above, and distant vistas of forested hills.” He tries to get out in the woods for at least an hour every day. And he appreciates Sycamore’s tireless efforts to protect natural places like this.

“I think the land trust idea is a way for people to be neighbors with nature…a part of the universe here on earth and right next door. If we have a connection to that in our daily lives, our ‘pursuit of happiness’ is tuned differently, less materialistic and humancentric. We’re a better species, collaborating rather than dominating and exploiting. We’re opened to the wondrous and wild patterns and systems that live beyond us and without us…great for the mind and spirit!”

Geese appear high over us,
pass and the sky closes, Abandon,
as in love or sleep holds
them to their way, clear,
in the ancient faith, what we need
is here.

from “The Wild Geese” by Wendell Berry