Reforesting a Floodplain Field at Touch the Earth 2 Preserve

Formerly farmland with two miles of frontage along North Fork Salt Creek, an anonymous family donated the 124 acres to Sycamore in 2006. Sycamore and the National Resources Conservation Service (NRCS) are working to remove invasive species and restore it to bottomland forest. It’s a critical part of the Lake Monroe watershed, so our restoration work will help protect water quality, reduce soil erosion, and restore wildlife habitat. 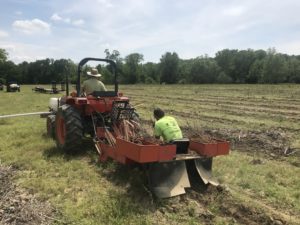 In May 2018, Sycamore Land Trust planted 30,000 native tree seedlings to reforest a 50-acre field at our Touch the Earth 2 Preserve in western Brown County. This field is bordered by the North Fork Salt Creek, a major water source for Lake Monroe. Reforesting this former crop field will restore important bottom forest habitat and help protect the health of the creek and the lake downstream.

The tree planting was completed by Habitat Solutions, a local forestry and habitat management contractor. This began with two rounds of treatments to kill invasive plants, one year apart, followed by planting trees. They planted a variety of 12 hardwood species, among them bald cypress, shellbark hickory, swamp white oak, and swamp chestnut oak. The crew then formed a buffer along the creek with pollinator-friendly shrubs like gray dogwood and buttonbush to foster a strong forest margin. Funding for the project came from the Natural Resource Conservation Service’s Wetlands Reserve Easement program.

An assessment in April 2019, one year after the planting, reported that the trees had a 95% success rate. It’s only the beginning for this fledgling floodplain forest. 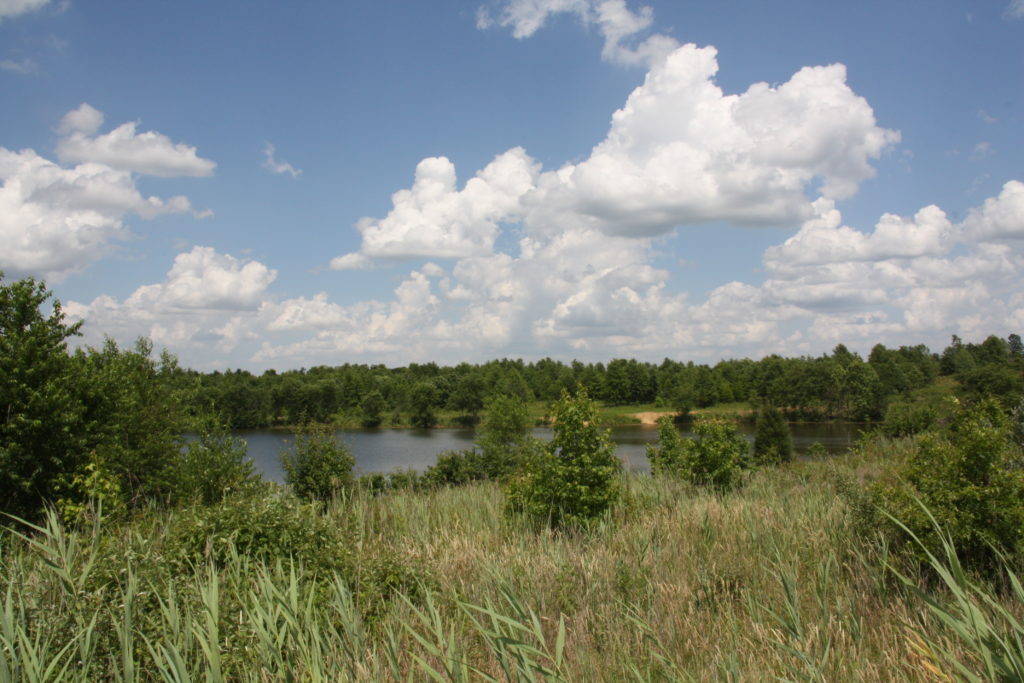 At 1,043 acres, Columbia Mine is Sycamore’s largest contiguous nature preserve. Much of the land was strip mined by Peabody Coal until 2000. When the company was finished with it, they replanted it with native grasses and trees, then left the land alone.

Columbia Mine sat unmanaged for 12 years before Sycamore stepped in to negotiate the purchase. Bill McCoy, a new Sycamore board member and recently retired Refuge Manger at Patoka River National Wildlife Refuge, called it “the mother of all land protection negotiations” due to complications with the deed that almost prevented the deal entirely, until Sycamore got involved. In that time, invasive plants took over. Japanese honeysuckle and autumn olive grew so thick they crowded out native grasses and shrubs, shifting natural succession and impacting creatures up and down the food chain.

Patoka manages the preserve, while Sycamore remains the owner. Funds for the purchase came from U.S. Fish and Wildlife Service, the Indiana Bicentennial Nature Trust, Ducks Unlimited, Sycamore members, and a conservation easement negotiated by Friends of Patoka River NWR.

Bill explains the level of invasive plant chaos when we were finally able to begin rehabilitating the land in 2012: the callery pear and black locust trees had grown so large that a normal bush hog couldn’t handle them. That’s when he hired a hefty Fecon chipper to run them over and break up the trunks into manageable particles. The Refuge also held several prescribed burns to remove brush and invasive plants, and stimulate native grass growth.

A fishery study of the 12 lakes created for mining found that the small fish had no forage base due to a lack of cover. In a partnership between Sycamore and Patoka, we used grant funds from American Forests and Alcoa along with donations from local businesses to bundle up the most massive invasive trees, which were too large even for the Fecon chipper, and drop them inside the perimeter of several of the lakes. To build more habitat, Patoka added boulders trucked in by a company that dug them up in the process of creating new landfills.

When mining companies restore land to its former state as required by federal regulation, the method they use compacts the soil more than would be ideal for the forest that once covered the land. But it’s perfect for grassland, a habitat in short supply in Indiana. Nesting grassland birds have an increasingly difficult time finding ground on which to nest. The farms they once occupied are becoming uninhabitable as soybeans and corn replace pasture and hayfields. And they need large tracts of land; half an acre here and there won’t cut it.

Bobwhite quail, wild turkeys, bobolinks, and Henslow’s sparrows are among the many species that wouldn’t have a home at Columbia Mine were it not for the new grasslands. Birds of prey like long-eared owls now have the opportunity to hunt in this open environment.

These preserves are two contiguous properties in the Beanblossom Creek Bicentennial Conservation Area, with fantastic opportunities for habitat restoration. The land includes 240 acres of former crop fields in the floodplain, a steep wooded bluff, and an upland field with karst topography.

Stewarding a new property often starts with cleaning up some messes; here, that meant selling an old pole barn and trailer to make space for more wilderness and reduce waste by giving them a second home. We fenced off a big sinkhole in the upland and hauled out large piles of junk dumped in the past. We hacked Asian bush honeysuckle from the bluff and sprayed reed canary grass in the wet floodplain areas to begin the ongoing process of removing invasive plants.

One simple restoration option would be to plant trees on the property; but as we’ve done at Columbia Mine, we’re excited about the chance to turn part of this preserve into a grassland to create much-needed habitat for grassland birds. After just a few years of less-frequent mowing in the pasture fields, we’ve noticed unusual birds including bobolinks, dickcissels, and Henslow’s sparrows. As we plant native grasses and prairie wildflowers, more pollinators such as monarch butterflies and native bees will make the preserves their home. Strong pollinator populations help humans and wildlife alike: they strengthen ecosystems by helping native plants thrive and pollinating many crops that humans depend on.

With the help of the Natural Resources Conservation Service, Sycamore will be restoring the Sam Shine Foundation/Dan Efroymson Preserves to native wetland, an abundantly productive habitat for thousands of species. Tasks will likely include removing field drainage tiles and blocking drainage ditches so that the water can stick around like it once did, before this area was ever farmed. Adding water control structures would allow seasonal drawdowns to create mudflats and shallow water for shorebirds like sandpipers, yellowlegs, and common snipe. 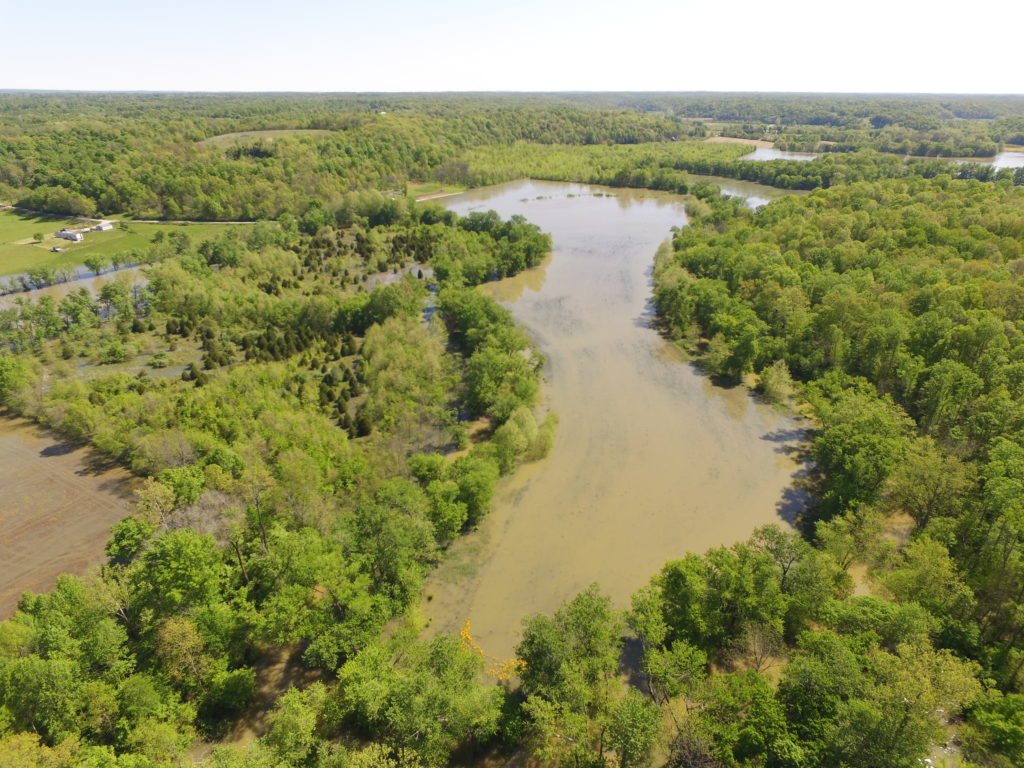