This article originally appeared in the summer 2019 issue of The Twig, our member newsletter. To see more articles and past issues, click here. 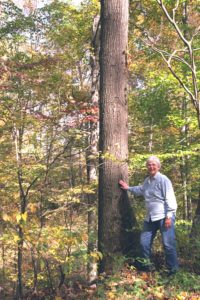 While conservation is forever, a lot can happen in a few years, and Sycamore’s beautiful Powell Preserve in Monroe County is a perfect example. As we remember Patsy Powell, who passed away in December 2018, stories of the land she cared for and donated to Sycamore shine a light on her legacy.

In 1964, just a stone’s throw down the road from Patsy’s beloved family home built in the 1880s and known as Breezy Point, Patsy and her husband Marvin purchased 68 acres of forest and fields that would later become the Powell Preserve. The rolling parcel was mostly forested, but also had a field that the Powells used for hay and pasture. Marvin passed away in 2001, and two years later, Patsy generously gave the land to Sycamore to be protected forever as a nature preserve. She had a great love of nature and of this part of the county, where her family has lived for generations, and preserving this land combined those passions.

Today the Powell Preserve is still mostly forested, with mature trees and beautiful spring wildflowers. It has frontage along one-third mile of Beanblossom Creek, protecting this important tributary of the White River. What was once hay fields for livestock has been transformed through several restoration projects we’ve undertaken.

On a cool spring day in 2006, Sycamore volunteers planted 700 native trees on an open slope above the creek. After we finished the planting, Patsy hosted the volunteers at Breezy Point, serving up a tasty chili lunch and sharing the story of her historic family home. Cinergy (now Duke Energy) gave Sycamore a grant in 2007 to restore the rest of the big field, which is crossed by a high-voltage transmission line, with native prairie flowers and grasses. The colorful show of wildflowers is now filled every year with butterflies, bees, and other pollinators. In 2015 we created a small wetland area that already echoes with the springtime calls of frogs and toads.

We encourage you to visit this hidden gem! Sycamore maintains a small roadside parking area and a one-mile mowed trail that loops around the prairie and travels up into the woods. The preserve is open to the public every day, dawn to dusk. Sycamore’s Environmental Education Program brings groups of all ages for guided hikes and activities, such as tagging monarch butterflies in the prairie so scientists can track their migration to Mexico. Recently, Indiana University’s Glenn Black Laboratory performed an archaeological study there with Sycamore’s help.

As with all our nature preserves, Sycamore volunteers, staff, and contractors put many hours of work into taking care of it every year: mowing the trails, pulling invasive plants like garlic mustard, picking up trash along the road, and regularly checking in on the land. Taking care of nature is the core of Sycamore’s mission. We’re so grateful to Patsy Powell for her generosity, foresight, and faith in entrusting her land to us to be cared for forever as the Powell Preserve.