This article originally appeared in the winter/spring 2020 issue of The Twig, our member newsletter. To see more articles and past issues, click here.

On a bright afternoon in early November, family and fellow environmentalists gathered at Sycamore’s Lake Lemon Woods preserve in Monroe County to honor the late Bob Klawitter and celebrate the renaming of the preserve in his honor. 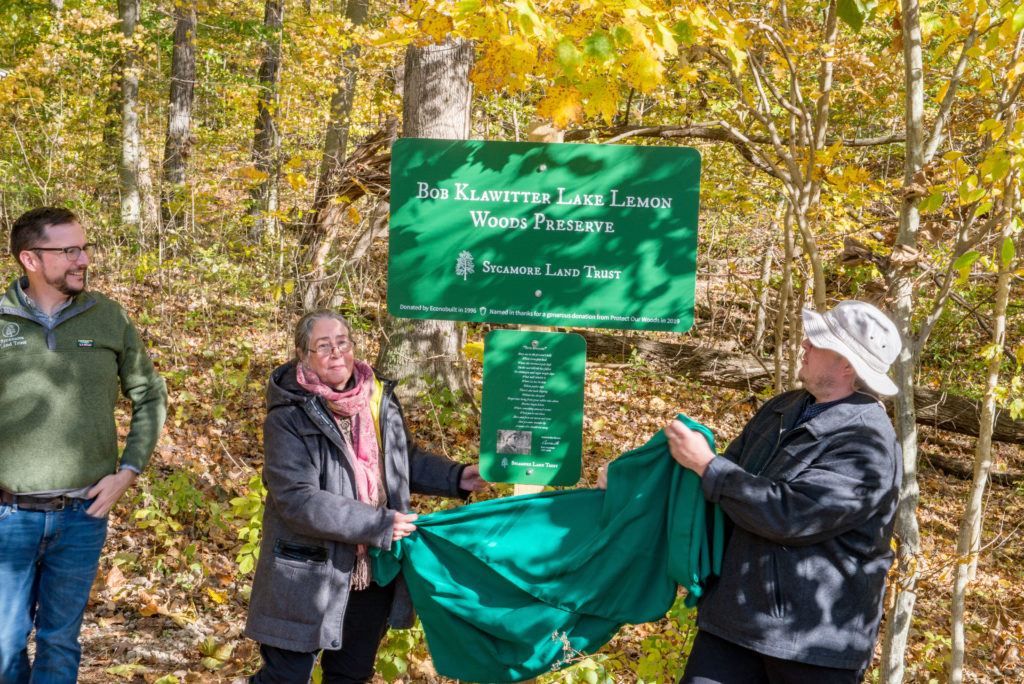 Bob was an IU Assistant Professor, organic farmer, writer, and Executive Director of Protect Our Woods. He received the Hoosier Environmental Council’s Environmentalist of the Year award and the Indiana governor’s Sagamore of the Wabash Award for his tireless environmental advocacy.

In the 1970s Bob and his wife Kathy moved to an isolated plot of land in Orange County, where they lived off the land in the model of Thoreau. They became involved in local environmental protection efforts in the mid-1980s, when they joined with Protect Our Woods and others to prevent the U.S. Forest Service from clearcutting trees and building over 100 miles of offroad vehicle trails in the Hoosier National Forest.

Bob also lead the successful effort to prevent a huge theme park/resort from being built on public lands at Patoka Lake, out of concern for potential damage to the water supply, impact on wildlife, and loss of hunting areas for local people.

Bob’s life was cut tragically short in 1996 when he died in a car crash. To memorialize Bob and his legacy, Protect Our Woods raised $35,000 to buy forested land, but the high cost of land prevented them carrying out their plan for many years.

Representatives from Protect Our Woods came to Sycamore to ask about donating the funds to purchase forested land, and if Bob could be recognized with a sign at one of Sycamore’s properties. Honored with this opportunity, we renamed the 16-acre Lake Lemon Woods in Bob’s memory. Protect Our Woods’ John Maier said, “Sycamore is established and active and can protect land in perpetuity, so it was the logical way for us to honor Bob’s vision and inspire others.”

At the formal unveiling of the new preserve signs, Kathy, their son Sam, other family members, and conservation colleagues shared stories about how Bob brought together tree lovers, hunters, local folk, statewide organizations, government agencies, and media to protect the local environment. Following a champagne toast to Bob, the group walked the winding trail through the woods.

Kathy told me that the dedication ceremony was a touching memorial. She hoped that naming the preserve for Bob would inspire others to give to Sycamore so we can acquire more land, restore habitat, and inspire people to love and protect nature.

“In conservation, you never know if your efforts will be successful, or where the tipping point will be, but that you just have to do it. Because if you are not doing it, it won’t happen.“
Kathy Klawitter

Steve Higgs, who has written about Indiana environmental issues for forty years, told me Bob was one of the most visionary people he has ever met. And that thanks to Sycamore, “his name will be associated with natural resource protection for eternity.” Sycamore names nature preserves, observation decks, and trail benches in honor of major donors and their loved ones. For more information on creating a lasting legacy, please contact me at ann@sycamorelandtrust.org, or 812-336-5382 ext. 104.