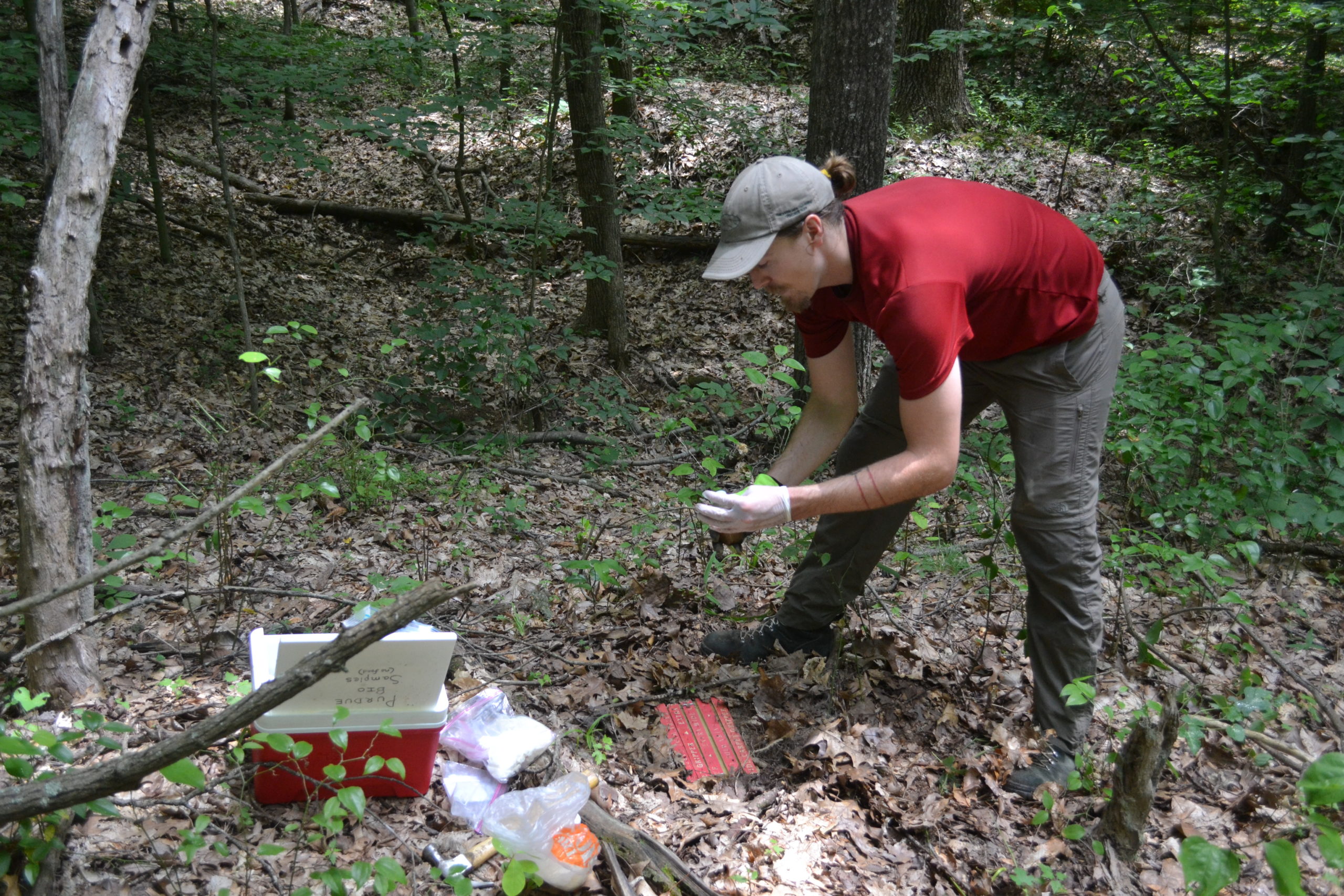 Earlier this year, Purdue University contacted us about collaborating on a predator research study at one of our Brown County preserves, the Laura Hare Nature Preserve at Downey Hill. The primary objective of the project was to collect data to better estimate the population of both coyotes (Canis latrans) and bobcats (Lynx rufus). The study uses a fascinating technique that is non-invasive. Unlike many population studies, this one did not require capturing the animals, but instead relies on passive hair collection to gather genetic material to identify individuals. This project is part of a larger study called the Integrated Deer Management Project in partnership with Indiana Department of Natural Resources.

The Laura Hare Nature Preserve at Downey Hill has the habitat these species prefer. Both have been found utilizing the area. Bobcats can live in many types of habitats across the country, including hardwood forests like this one, and are solitary animals that require large expanses of safe ground for hunting and raising their young in dens. Coyotes tend to live in forests, grasslands, and deserts, and hunt alone unless they’re hunting large mammals that require hunting as a pack. Although coyotes do often hunt alone, they do not lead a solitary life like bobcats. The male coyote assists the female with feeding the pups and it is believed they may mate for life. In fact, the family bond is such that sometimes the yearling females will help raise the next litter. The preserve where we set up the study is nearly 600 acres of wooded hills located near Brown County State Park and Yellowwood State Forest, offering great habitat for both coyotes and bobcats. 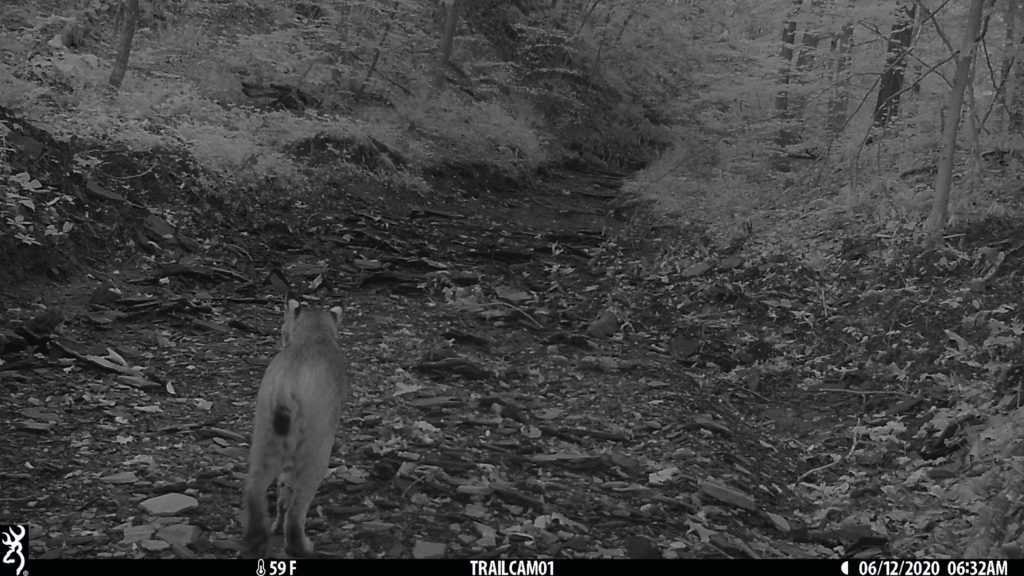 One hot and humid July day, I met Jesse Ellgren, Purdue Research Technician, at the preserve to install several hair collection stations. As I pulled up to the preserve, I fully expected to see Jesse in a truck with a large wooden crate in the back with the word ACME on the side. Although that failed to be the case, I was not disappointed as Jesse was very knowledgeable and kindly explained the process and purpose of the hair collection stations. The first station we installed was the bobcat cubby. It is a blue plastic tunnel-like structure, which to me looks more like a pup tent. Small metal brushes inside collect the hair as the bobcat walks through it. The bobcat is lured into the cubby with a concoction of scent lures that Jesse kindly warned me were quite pungent. However, I was not prepared for the stench that plumed from the bottle. Pungent was not the word that came to my mind.

Next, we installed a coyote rub pad. Researchers have found the coyotes do not like to walk through the tight quarters of the bobcat cubby but instead, like most canines, prefer to roll around on the odorous scents. The rub pad consists of a series of small tacks that act almost like a back scratcher or curry comb. As the coyote rubs on the scent, the rub pad collects hairs that can later be used to identify individuals. The coyotes are attracted to the rub pads by a different potion of scents. As Jesse pulled out the scent lure bottle, I was certain it would be labeled, Essence of Road Runner. Wrong again…but I say a missed marketing opportunity. After we finished installing the coyote rub pad, we scouted for other possible hair collection station locations and also looked for scat along the trail. Oh, the glamorous life of field researcher. 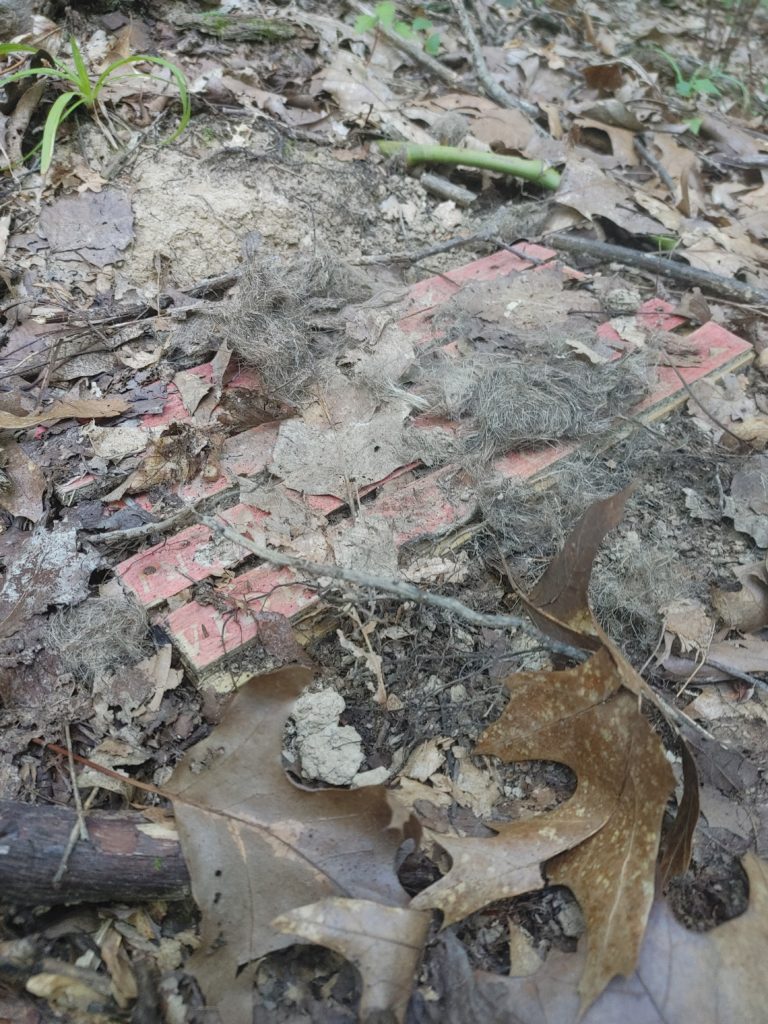 At this point, you might be wondering why this research is necessary. Neither the coyote nor the bobcat are threatened or endangered. In fact, both populations seem to be increasing. The research is important because in order to make wise decisions on resource management, we need to study as much of the ecosystem as possible. John Muir said, “When we try to pick out anything by itself, we find it hitched to everything else in the Universe.” Decision on forest management — or deer management, for that matter — can’t be complete without looking at the bigger picture.

And so, with all these thoughts running through my mind, Jesse and I headed back to our trucks. As we walked along the ridge I thought about how much the landscape of Indiana has changed. How these hills were once bare and eroded less than 100 years ago. How in my lifetime I have witnessed the dramatic rise in the deer population and the expansion of the coyote and, more recently, the return of the bobcat. We have come a long way. Sure, we still face many challenges ahead, but the future of conservation in Indiana looks bright. As I said goodbye to Jesse and pulled out of the parking lot I honked my horn. Twice, of course! Beep beep!

The Integrated Deer Management Project is a multi-year research project undertaken by the Department of Forestry and Natural Resources at Purdue University in partnership with the Indiana Department of Natural Resources – Division of Fish and Wildlife. The project is led by Dr. Rob Swihart and project coordinator Pat McGovern from Purdue University. The project seeks to combine information on deer populations, current deer habitat, and people’s attitudes and expectations about deer populations for improved understanding and management of deer in Indiana. Project objectives are:

As part of these objectives, a number of methods are employed to collect data in the field. Trail cameras are deployed to photograph deer and other wildlife. Scat surveys are conducted from both deer and predator species for genetic identification. Plant species are surveyed for signs of deer browse at multiple times of the year, and deer exclosures are constructed to compare plant communities with and without deer present. Recently, non-invasive, passive hair collection stations have been installed to survey wildlife species that are known to prey on fawns, such as bobcats and coyotes. All of this information will be assembled into a statewide model for deer management.