Bridging Nature and the Classroom: A Woodland Restoration Project at Heth-Washington Elementary

From our Winter-Spring 2021 issue of  The Twig, “The Trails Issue”:

“Don’t go to the woods! There are snakes in there!”

These words were often uttered by teachers at Heth-Washington Elementary in Harrison County when I first met with Principal Nissa Ellett in 2017. The two acres of woods on the school ground had an impenetrable, uninviting edge — a tangled wall of multiflora rose, honeysuckle vine, goldenrod, and ragweed. It was a living and growing being that would “eat” basketballs and kickballs as they rolled off the playground. Mrs. Ellett and I had a vision to increase access to these woods, and new Principal Sue Lanham helped see the vision through.

With help from the Harrison County Community Foundation, Sycamore Land Trust entered into a partnership with Heth-Washington Elementary to bring nature-based programs to the school and create a master plan of projects intended to benefit students, teachers, and community members. The plan included goals for an exercise path, additional playground equipment, natural plantings, and restoring the woods to have trails, bridges, and interpretive signs. We narrowed our focus to the woodland restoration and creating an outdoor classroom, knowing the master plan would be there to guide further development when funds were available.

Eco Logic, a native plant restoration company, was hired to do forestry mowing along the woods’ edge and to cut the interior trails. Next, we hired Woodland Works to do several treatments of non-native, invasive plants. With the progress made from their efforts, we could finally enter the interior of the woods.

Lucas Coffman, a Heth- Washington parent and local business owner, donated ash tree stumps and split eastern red cedar for seating. Lucas’s grandfather, father, and uncles originally developed the trails and other structures in these woods many years ago. Now, with his two children at the school, Lucas had a further personal connection to the woodland trails project.

With access to the woods now possible, preschool and sixth-grade students planted oaks and hickories to assist in the restoration. Upon resuming work a year later, we found that significant understory growth had occurred on the trail and around our seating areas. Another community partner, Eagle Scout Theodore Cooperwaite, worked with Principal Sue Lanham to organize the re-clearing. Theodore and crew had the area ready for Sycamore to begin building three bridges across the creek bed.

With Land Stewardship Manager Chris Fox’s experience building the boardwalk at Beanblossom Bottoms, he supervised designing and building these bridges using the same boardwalk material. Through the spring and summer of 2020, we worked on building the frames and placing the decking on the bridges. Parent and school neighbor David Bridgewater and his co-workers assisted in laying deck and back filling around the bridges. On a Saturday morning just before the first day of school, Harrison County high school students, along with myself and Heth-Washington parents, staff, and students, mulched and finished the trail. 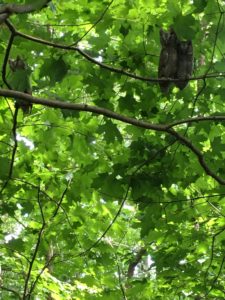 The new outdoor class space at Heth- Washington brings students closer to nature and wildlife, like these Eastern screech owls spotted on the trail by Chris Fox and Shane Gibson last summer.

At Heth-Washington Elementary, students and teachers now have a viable option for outdoor learning. Where once a fortress of briars hid the wildlife, there is now an inviting trail system that has already provided sightings of eastern box turtles, three young screech owls, rabbits, animal tracks galore, cherry trees, spicebush, and hackberry trees. A space doesn’t need to be vast to provide connections to nature.

That space just needs to exist.

“Let’s go to the woods! There are snakes in there!” 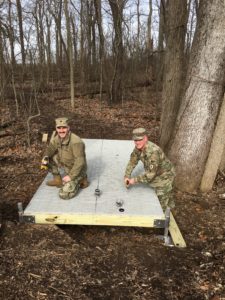