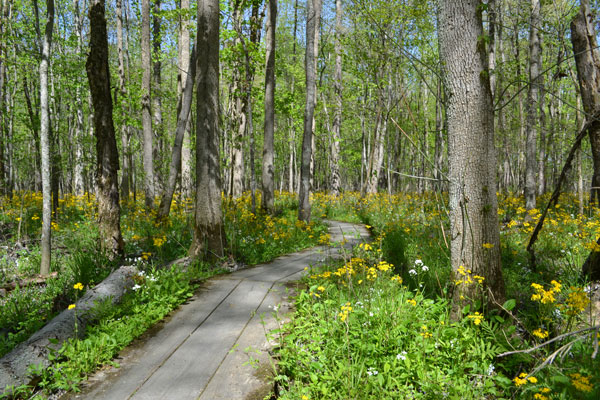 Each spring, as the winter world wakes up with the warming soil, the chorus of frogs at Beanblossom Bottoms Nature Preserve begins. Soon you can hear them long before you arrive in the parking lot, as thousands sing out after emerging from a long winter rest at the bottom of the wetland’s frozen pools and muddy depths.

An important part of Sycamore’s mission is to connect people with nature. Nowhere is this more apparent than at Beanblossom Bottom’s boardwalk, where visitors are given a unique glimpse into the heart of a protected wetland habitat that is haven to an abundant and thriving wildlife community. The frogs are hidden from view for most of the year, but each spring the crescendo of their riotous chorus leaves no doubt to the importance of this environment and just how many call it home.

The biodiversity of Indiana’s wetlands is staggering. Like rain forests and coral reefs, wetlands are considered among the most productive ecosystems in the world, containing an immense variety of microbes, plants, insects, amphibians, reptiles, birds, fish, and mammals. About 900 species of vertebrate animals depend on wetlands at some point in their lives.

There were once over 5.6 million acres of wetlands in Indiana and 25% of our state was covered in bogs, fens, wet prairies, dune and swales, marshes, and swamps. Yet as European settlers moved west, eager for farmland and profitable resources, they drained the rich, dark soil at the expense of our fragile, interconnected ecosystems. Many early settlers also considered wetlands to be health hazards, believing that even breathing the air could be deadly.

Since the 1780s, over 85% of Indiana’s wetlands have been lost, with most of the habitat drained and converted to agricultural land. Wetlands now cover less than 4% of Indiana. Organizations like Sycamore strive to protect what remains and correct early misconceptions about the importance of these vital environments to Indiana’s future.

Many of wetlands’ valuable functions and benefits are due to their unique plant communities. Although wetlands constitute only about 5% of land surface in the contiguous United States, they are home to 31% of our plant species. Considered “biological supermarkets,” they play an integral role in the ecology of Indiana’s watersheds by providing vast quantities of food to sustain wildlife. As dead plants break down in the shallow water, nutrient-rich organic material called “detritus” forms and feeds many aquatic insects and fish, which in turn provide food for reptiles, amphibians, birds, and mammals. Almost half of North American bird species nest or feed in wetlands, and they are the principal habitat for virtually all species of waterfowl.

Because so many wetlands have been lost or degraded, the Indiana Department of Natural Resources reports that Indiana has more than 120 species of wetland plants that are now endangered, threatened, or rare, and over 60 wetland-dependent animal species that are listed as endangered, threatened, or of special concern. Nationally, nearly 35% of all rare and endangered animal species depend on these dwindling habitats for survival.

Wetlands also play an important role in improving Indiana’s water quality, making our lakes and streams cleaner and our drinking water safer. Their plants and soils naturally store and filter nutrients and sediments, including those within farm fertilizers and septic system runoff. They also trap and hold pollutants such as pesticides. Calm waters allow these materials to settle out of the water column, where wetland plants take up certain nutrients from the water, “recycling” them within the wetland system. Man-made wetlands can even be used to clean wastewater.

Like giant sponges, an acre of wetland can store up to 1.5 million gallons of floodwater, protecting homes and businesses from flood damage by soaking up and slowly releasing the flow of stormwater down rivers and streams. Wetlands also hold soil in place and buffer strong currents, protecting shorelines and watersheds from erosion.

As we face the threat of a rapidly warming planet and more frequent dangerous weather events, scientists now understand wetlands play an additional vital function to help moderate global climate conditions by storing carbon within their plant communities and soil instead of releasing it into the atmosphere as carbon dioxide.

Wetland protection and restoration is vital to the future of Indiana. Often called the “kidneys of the landscape,” they play an indispensable role in circulating groundwater and removing waste to maintain a healthy ecosystem. Just as our bodies deteriorate without functioning kidneys, Indiana’s natural environment suffers greatly from the loss of its critical wetland habitats.

As an ever-changing legislative environment leaves these sacred spaces increasingly vulnerable, Sycamore remains more focused than ever on our important and ongoing responsibility to protect wetlands, strengthened in the knowledge that the precious acres we preserve and restore will endure, benefiting our community long into the future. 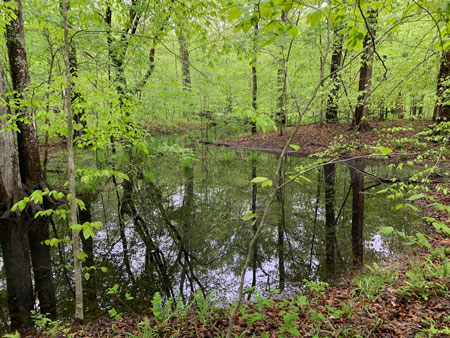 Ephemeral wetlands like this one at Trevlac Bluffs Nature Preserve are temporary ponds that fill in the spring and dry up later in the year, creating ideal breeding habitat for amphibians where larvae are safe from fish. Kate Hammel

This year along the Beanblossom Bottoms Nature Preserve boardwalk, Sycamore staff noticed signs of beavers hard at work creating openings for new vegetation growth. Curious to watch the activity, we set up a motion-activated trail camera at a beaver dam.

We were pleasantly surprised by the number of species captured by our “Dam Cam” in just a few short weeks, including deer, bobcats, raccoons, opossums, muskrats, foxes, owls, wood ducks, geese with their goslings, and this majestic Great blue heron. 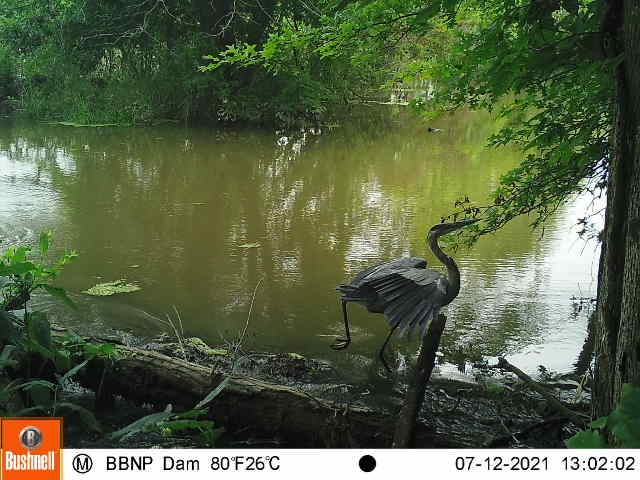 Although great blue herons spend most of their time alone, they usually nest in colonies. A colony or rookery, like the one found at Sycamore’s nearby Grandchildren’s Woods, can have more than 500 nests and is very sensitive to disturbance.

“We were hoping to see deer because we found prints in the mud,” Executive Director John Lawrence explained. “But wow, everybody uses this dam as a crossing. We are recording these animals not only crossing the dam but really using this important wetland environment.” Follow along on social media for more “Dam Cam” photo updates: @SycamoreLandTrust on Facebook or Instagram.

This article was published in the Summer 2021 edition of The Twig “The Wetlands Issue.”  Read more here.