Throughout this issue of The Twig, we have highlighted several species, both common and rare, that depend on wetlands. I have been fortunate to witness many of these species on our preserves as I go about my land stewardship duties.

I have been face-to-face with a beaver as I waded through its flooded wetland home. I have stood motionless looking into the eyes of an American bittern. I have cheered at finding a state-endangered Kirtland’s snake under a cover board during recent surveys. I have stared in awe at the magical display of the rare cypress firefly on a warm summer’s night.

However, one encounter has become quite special to me. As I walked the boardwalk at Beanblossom Bottoms one evening, I came across a mother raccoon out with her cubs. The mother picked up my scent and quickly disappeared into the sedges, but the kits were more curious. Soon, the young cubs went back to foraging in the water, unconcerned about me standing right above them. As I watched and listened, I saw them not as garbage-rummaging scavengers, but as animals perfectly adapted to a life in the wetlands.

I have likely seen hundreds of raccoons in my lifetime, but this was different. It was like seeing them for the first time, living the life they were meant to live in a place they belonged. And then it happened! Suddenly, one young kit reached up and touched the tip of my boot ever so gently. As if to say, “Hello! What are you doing?” Instantly, I felt connected to that moment, connected to that family of raccoons, and connected to the wetland itself. It felt like I was part of something bigger than myself.

That experience has replayed in my mind many times since then. It serves as a reminder that we must expand our circle of compassion and respect to include all living things. We need to realize that wetlands and the species that call them home are not separate from ourselves, but part of the greater community of which we are also a part. If we can do that then maybe, just maybe, we can begin to truly appreciate their value.

I first encountered this idea in Aldo Leopold’s A Sand County Almanac. Leopold called this concept a “land ethic” and explained it as such:

“All ethics so far evolved rest upon a single premise: that the individual is a member of a community of interdependent parts. The land ethic simply enlarges the boundaries of the community to include soils, waters, plants and animals, or collectively the land.”

I think there is no better time than the present for a renewed sense of ethics. Let us put Leopold’s words into action by extending our community boundaries to include all living things. For in the end, we are all part of one community. We all share one home. 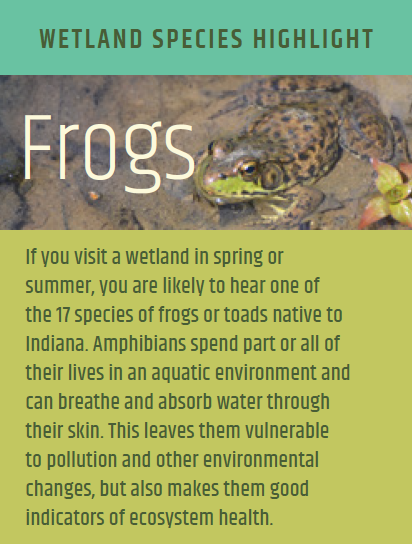 This article was published in the Summer 2021 edition of The Twig “The Wetlands Issue.”  Read more here.