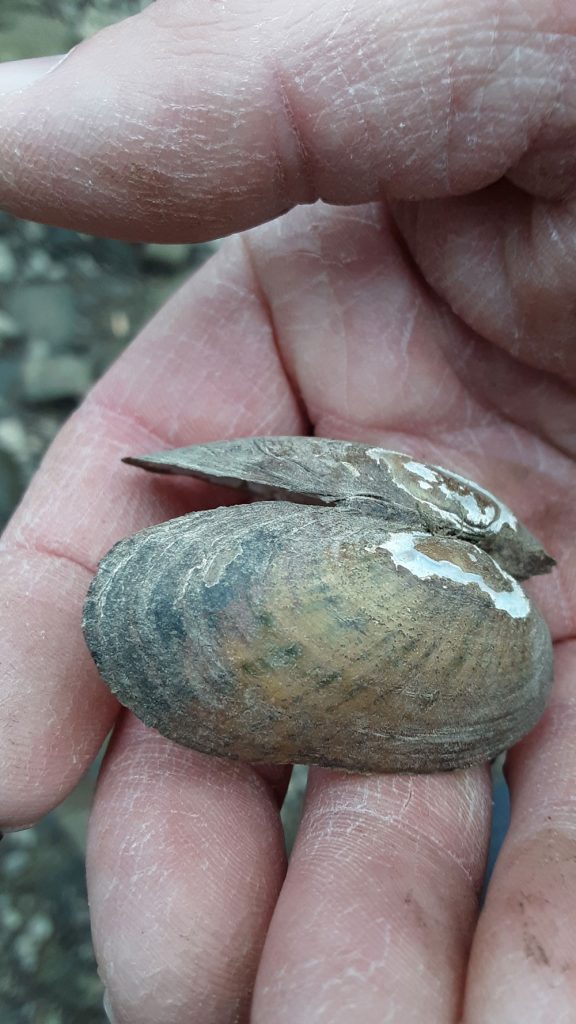 While monitoring a remote property in Green County, our Land Stewardship Director Chris Fox found these two species of mussel shells on a hike through Clifty Creek. Mussels have a fascinating and odd life cycle and are very important to the health of our ecosystem. They act as natural filters and are indicators of good water quality and habitat stability. Yet despite their importance to the health of the land, most are imperiled. 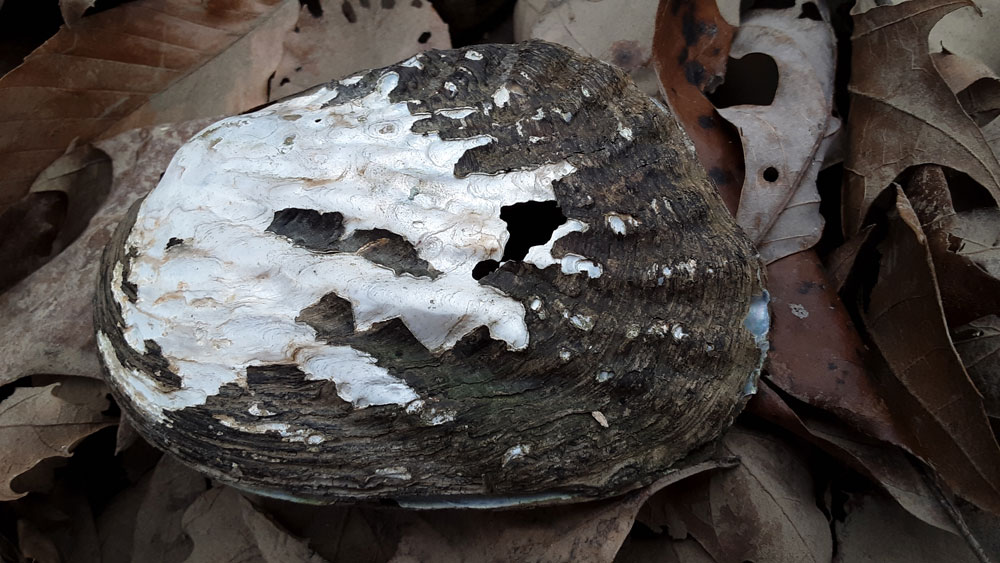 Chris was having trouble figuring it out which species he found, so he checked with Cassie Hauswald, Indiana Freshwater Ecologist at The Nature Conservancy in Indiana, who is an expert on freshwater mussels.

“December can provide those rare balmy days when water levels are low to check in on what is living below the water surface,” she explained. “Finding mussel shells is one way to assess what species live in Indiana streams since living mussels typically bury themselves in the stream substrate and are not so easy to detect – part of the reason for their persistence in smaller streams like Clifty Creek.”

The shells Chris was finding were not weathered dead, but represented species that had recently deceased, most likely from age or being foraged for an otter’s dinner. Two species of interest were noted.

“The threeridge mussel (Amblema plicata) is a common species in Indiana streams, partially because it is a generalist as to fish hosts that can transform its parasitic larvae into baby mussels. Threeride mussels depend upon fish such as rock bass and bluegill to complete their lifecycle.

“The other mussel shell that Chris discovered was an older rainbow mussel (Villosa iris). He knew it was older because this is a fairly small mussel and the shell he found was maxed out in terms of size and hence age. Rainbow mussels are not uncommon in Clifty Creek, but they are gone from many Indiana streams. The rainbow is a species of special concern in Indiana.

“Remember, mussel shells are protected in Indiana, meaning you must possess a permit to keep the shells. Just as Chris was using the mussel shells as a record of what occurs in the stream, leaving the shells assures that future generations can understand the history of our streams, not to mention the habitat the shells provide to other fish and invertebrates that call Clifty Creek home.”

Thanks Cassie for sharing her mussel wisdom! Sycamore’s work benefits from many partnerships like this one with The Nature Conservancy that help us identify and better understand how to protect the species we find on our nature preserves. It takes a village to protect and care for southern Indiana’s natural treasures, and we are grateful for ours!