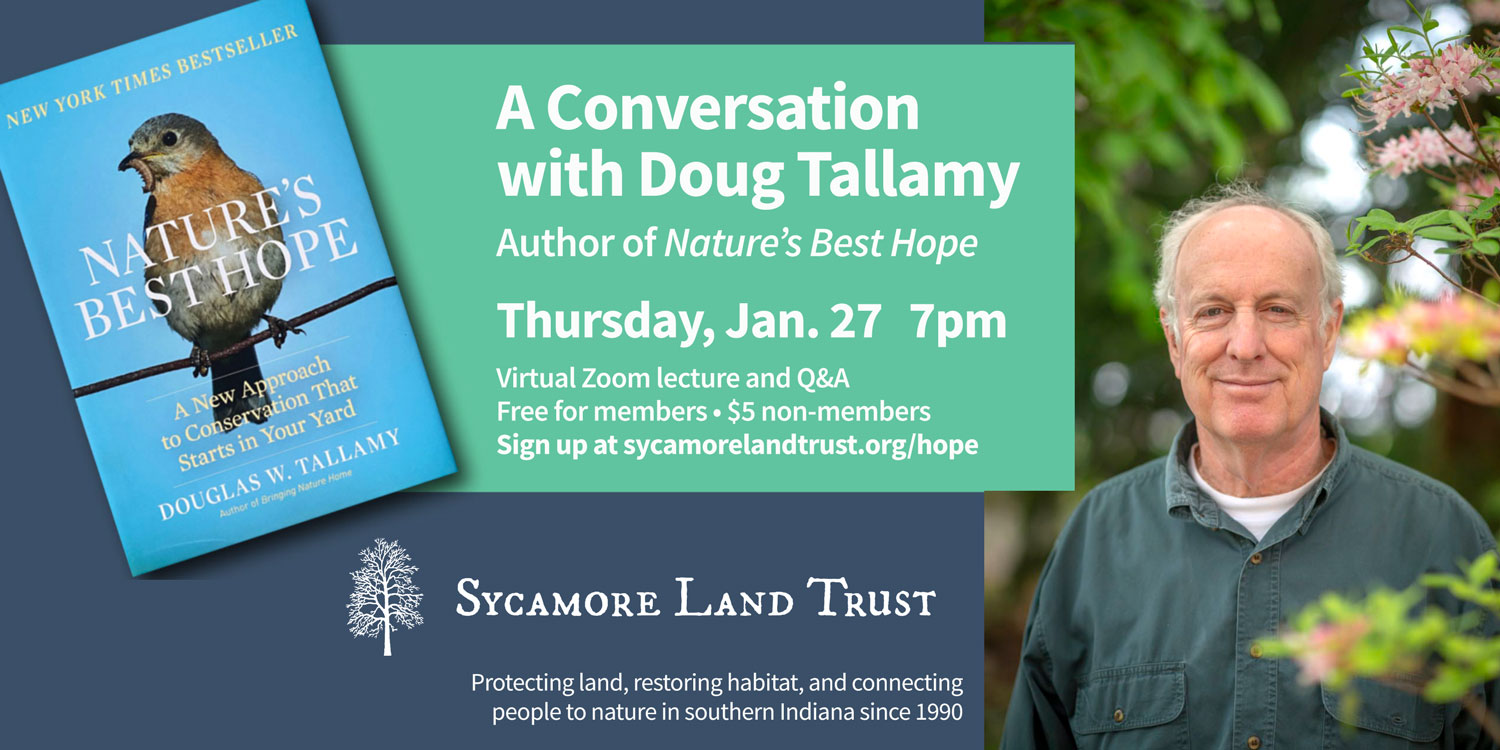 A Conversation with Douglas W. Tallamy

Join Sycamore Land Trust for a conversation with Doug Tallamy, entomologist and author of Nature’s Best Hope: A New Approach to Conservation That Starts in Your Yard. In this virtual Zoom lecture and Q&A, Doug Tallamy discusses simple steps that each of us can take to reverse declining biodiversity and will explain why we, ourselves, are nature’s best hope.

Recent headlines about global insect declines, the impending extinction of one million species worldwide, and three billion fewer birds in North America are a bleak reality check about how ineffective our current landscape designs have been at sustaining the plants and animals that sustain us. Such losses are not an option if we wish to continue our current standard of living on Planet Earth. The good news is that none of this is inevitable. Doug Tallamy will discuss simple steps that each of us can- and must- take to reverse declining biodiversity and will explain why we, ourselves, are nature’s best hope.

Doug Tallamy is the T. A. Baker Professor of Agriculture in the Department of Entomology and Wildlife Ecology at the University of Delaware, where he has authored 104 research publications and has taught insect related courses for 40 years. Chief among his research goals is to better understand the many ways insects interact with plants and how such interactions determine the diversity of animal communities. His book Bringing Nature Home was published by Timber Press in 2007 and was awarded the 2008 Silver Medal by the Garden Writers’ Association. The Living Landscape, co-authored with Rick Darke, was published in 2014; Nature’s Best Hope, a New York Times Best Seller, was released in February 2020, and his latest book The Nature of Oaks was released by Timber press in March 2021. Among his awards are the Garden Club of America Margaret Douglas Medal for Conservation and the Tom Dodd, Jr. Award of Excellence, the 2018 AHS B.Y. Morrison Communication Award and the 2019 Cynthia Westcott Scientific Writing Award.